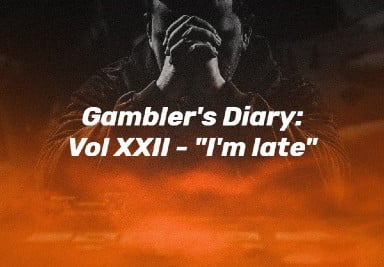 It’s a scary sentence even in the best of times, luckily, this time, I’m only referring to my writings.

But yeah, I, indeed am late. I have two excuses: Firstly: Twitching started. Secondly: I played the rake-races on party for two weeks. I’ll go over them separately.

Like some of you surely noticed Beasts of Poker asked me to Twitch a while ago. It seemed like fun so didn’t really see any reasons not to do it. Now, in hindsight, some one-liners from the King come to mind. I don’t really have the capacity to explain how question: “You got any anal from your girlfriend recently?”, while playing 9 fast-forwards at Party and trying to co-host a Twitch affects you or your game. Or how it makes you feel when your co-host spontaneously drops his jeans so he can “advertise” his boxers for the viewers. Side note: I’m not convinced that people watching got the “smoothness that is bamboo-silk” cuirassing his crotch, but what I remember was a moment where I became vividly aware of the fact that hundreds of people are watching and Pampo’s dong is laying approximately 5 centimetres away from my face, shielded only by the very thin layer of bamboo-silk.

Pampo’s trolling was something that I had estimated might happen, and something that I’m somewhat used to. However, his constant timeouts after a couple of bottles of wine were unexpected and opened my eyes to a new sort of pain. Indeed, repeating time after time “Pampo, play your hand first” while watching your friend dance himself to a time-out was a brilliant way to induce enormous mental stress and was something I hadn’t thought about even in my most outlandish estimations. So, Pampo, when you’re reading this – know that even 12-minutes of time bank is not enough. Not even close. SO PLAY YOUR HAND FIRST – dance after. You monkey.

All in all, I think it would be fair to say that my expectations about Twitch turned out to be a bit different from the actual experience. Still, I mostly enjoyed it and I think that so did some of our viewers too. So, if you haven’t already, give beastsofpoker a follow on Twitch. You will be seeing more of us in the not-too-distant future. We even hired some help for our technical difficulties on the operating side of it so the quality too, will be most likely better. Of course, it is still me operating the damn thing so wouldn’t expect too much. Also new streamers will be joining us at least at some point so it won’t be just me and Pampo clowning around. Who knows, you might even learn something.

Now playing partypoker’s leaderboards is like having a really long panic attack. In order to play nearly 2000 hands an hour, you need to completely focus on the task at hand. I play for 55 minutes, have a 5-minute break, and then repeat the cycle for six to ten times a day. During the breaks it’s convenient to have your actual panic attacks (if you have tendencies for those – like I do) and when done with that use the remaining minutes to curse your life choices, opponents and faulty mix of DNA and upbringing that led you here. Poker has always been my passion and for more than a decade now also my only source of income. I love poker. Playing the leaderboard doesn’t really feel like the game I love though; it feels like a labor. And labor is something I’ve extremely successfully avoided for my whole life. However, times have been tough and since I didn’t hold my hands at some crucial pots earlier this year, I’m now deemed to grind buy ins at 1-2 and 2,5-5 until I’m ready to be punished by the gruel variance that is live poker. I shouldn’t sound too bitchy about my recent situation though. Even though my last stint on the online felts was a rather long one – two weeks in time and hundreds of thousands of hands – it was a profitable one too. I profited around 150 buy ins which, even at plo200, is a lot and something that even the most bitter of us need to be happy about. After a long run of bad beats it did feel extra great to be back at winning too. Not sure what would’ve happened if I didn’t bank a big win from my efforts. Even thoughts of an honest job had crossed my mind – I guess the situation was very dire indeed. Luckily, it feels like I got this now and my plan is just to grind for the foreseeable future at party and try to hit the 200k rake mark. The plan is very logical but at the same time full of pain and I’m sure I will have major regrets about it at some point in the future. I’ll let you know when I lose it, and by “it”, I mean my psyche.

That’s all. Hope you have a great summer. I’m still on a holiday for a week but after that will be right back at it.