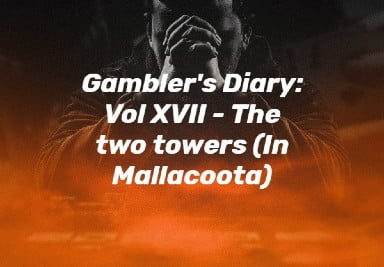 Beasts of Poker
The two towers (In Mallacoota)

“FUUUCK” Joni screamed. I was pushed on the other side of my seat as we just missed oncoming traffic.

“Hey! Don’t drive like a dick – I’m spilling my wine”. I said as I tried to pour myself a glass.

Joni gave me a look that could kill.

“I didn’t realize how big the flip was – I have driven on the other side of the road for all my life”, Joni said.

“We’ll be alright” I said and took a big gulp of my wine.

We had flipped who had to start driving. The other one was free to do whatever he felt like but had to take the wheel the next day. I didn’t trust the arrangement entirely and as a precaution was hitting the wine especially hard. If Joni would try to sneak me behind the wheel, he would be now faced with a problem – how do you make one drive that’s way beyond driving condition?

Checkmate my friend, checkmate. I thought and grinned.

The next couple of days of the road trip went smoothly. Life was good and the days slipped past me as we drove, drank wine through the night and met local wildlife. The pleasantness of the trip was ruined on the fourth day when Mr.Jouhkimainen forgot a tiny detail – cars need fuel. It was a Friday night and as we sat on our foldable chairs on the side of the road in the middle of nowhere a worrisome thought came to my mind:

Later that night with the prompt help by triple A we arrive in a town called Mallacoota. It’s not much, a small town with a couple of motels, a Chinese restaurant and a car shop. The car shop is already closed and our badly wounded Jucy is towed on the field next to it. We must wait at least until Monday. For the clarity to the reader (and laziness of the writer) I will go over the incidents that happened in Mallacoota day by day.

Friday evening: Me and Joni find out that there’s two options: a motel without a bar and a motel with a bar. We choose the latter. To Joni’s happy surprise they also have a snooker table – a fact that I’m not that thrilled with. In the bar we met with some sport fishers who had come to town for a big fishing tournament. They told us stories about fighting kangaroos while we bought rounds of whiskey and Joni’s hustled me in snooker. My last recollection is getting inspired by Jon Lajoie’s “show me your genitals” and sending some highly questionable photos to my then on and off girlfriend.

Saturday: I’ve lost my phone. Didn’t fight kangaroos, but not pleased by the fact that my phone and all the most recent photos I’ve taken with it are gone. Have a chat with Joni about it (didn’t mention any photos though) and he tells me: “Oh yeah if they know what they’re doing they can totally access all your personal information”. Fuck. I heard there are 400 people in the village. Everyone is a suspect.

Sunday: Quite hungover from the fishing tournament “party”. We decide to go to the beach and drink some wine. We put on tiger costumes that we bought earlier because why not? I’m starting to feel isolated without a phone. Joni hustles me in some wine bottle -throwing bet that we invented on the beach. Later also in snooker. Luckily: we’re getting out of this town tomorrow.

Tuesday morning: We get to the car shop in the morning and are again told to “come back in the evening aye”. I fantasize about using the wrench as a baseball practice to the clerks’ head as we’re leaving. The clerk looks a bit worried – almost as if he knew what I was thinking.

Tuesday evening: They tell us at the car shop that the car won’t be moving anywhere anytime soon. I inform Jucy’s customer service in a quick 22-hour (my estimation) phone call that the car might stay in Mallacoota but the boys sure as hell won’t. They’re not delighted. I get drunk.

We’re waiting for a bus to get us out of Mallacoota at 6am. Booze, kangaroos, losing my phone and being stuck on Mallacoota for five days has made me a spitting image of Johnny from the shining. Only difference is that I don’t have an axe (mostly because of airport security) and Johnny didn’t wear a tiger costume. Even Joni is starting to annoy me. I just need to get out. The lovely fishing village in the middle of nowhere has turned into a hotel California for me. Everyday being the same with no real contact to the outer world. Two things have become clear to me, one: I can’t handle even the smallest isolation and two: I’m a giant pussy.

The bus should’ve been here by now

Worryingly I tell Joni that I go check from the motel that the bus is really coming. He nods and disappears to his phone.

I get to the motel:

“Hey man, so when is the next bus to Sydney coming again? We thought it was supposed to arrive at six”

The hotel clerk looks at me dumbfound:

“Yea no mate. The next one to Sydney leaves in two days”

Surrounded by very dark thoughts I ran back to the bus stop.

“YOU JUST COULDN’T PUT FUEL IN THE CAR” I yell at Joni.

Joni takes a step back.

Don’t be a dick the whole situation is an accident

FUCK THAT I CANT DO ANYTHING

AND HOW THE FUCK IS HE SO CALM? AM I THE ONLY ONE WITH THIS RAGE?

I’m just sitting on the bus stop now. Not saying anything. Trying to control myself and starting to be more upset about my recent outburst than the situation. Joni is still looking at me.

“I know man. I know… Well, let’s figure out something.”

Holy shit he’s right – we can figure this out

We grab our gear and head back to the Motel. Never mind the minor mental collapse – I’m a man on a mission now. I run a bit ahead of Joni to the Motels desk and tell the clerk to inform anyone who might be willing to drive us to the nearest town with an airport.

“Put WILLING TO PAY A LOT on caps on the notification”, I say to the clerk who’s writing on the town’s Facebook wall.

“I don’t care if it’s tacky, I rather be tacky and out of here and if I know something it’s that money works” I snapped.

Then we sat down in the Motel’s chairs and waited while I contemplated if 6.30 in the morning is too early to start drinking.

Three hours later we were putting our bags in the hay filled booth of a blue Vauxhall. The booth was filled with hay because our Driver, Bob, used to transport his five-meter pet boa there. Luckily, I didn’t see any snakes in the car – and even if I would’ve – I had still taken the ride.

We were finally getting out of Mallacoota.